As a result of climate and land use changes. Eastern Bluebird populations reached an ultimate low in the late 1960’s. These birds lost much of their habitat as forests were cut for expanding communities and agricultural purposes. In 1978, the North American Bluebird Society was 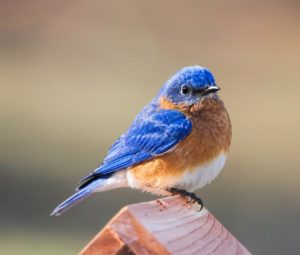 founded to promote the recovery of Bluebirds and other cavity nesters. Since then, volunteers have been designing and developing boxes and trails to observe and record data of the bluebirds but more importantly to enjoy their beautiful vivid blue bodies in flight.
The volunteers who monitor the Park District boxes throughout the spring and summer do so on trails located at Thayer Ridge, Honey Run Highlands and Wolf Run Parks. Those volunteers include: Nancy Kephart, Lana Runyan, Marcia Crim, Lori Cook, Susan Guttormsen, Jean and Tim Tahyi.